I question my sanity regularly. Fortunately, it usually doesn’t answer and I take that as a sign that I’m mostly still okay — or perhaps my sanity has taken a vow of silence.

Three weeks ago a new puppy joined my family. Well, he didn’t just show up at the front door  and when I answered, say with his eyes lowered, “I’ve been searching for my birth mom and I believe you may be her.” I was somewhat involved in the process. Involved, as in, I decided that my three senior wiener dogs and I could probably use some youthful energy to perk things up around here, then I scoured all the animal rescue sites nearby for dachshunds, filled out three applications, and went to meet a young fellow named “Boston” who was advertised as a 1-1/2 year old dachshund. 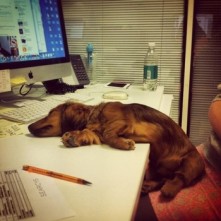 Did I mention that I frequently have doubts about my sanity?

As it turns out, Boston was lying about his age. And lineage. And name.

His name is actually Murray. I know this because when I call it, he comes. Two of my other dogs are named Watson and Justin, so Boston was not going to work. Plus, when he barked, there was no trace of an East Coast accent.

He’s definitely part dachshund — the stubborn, hole-digging, begging for treats until you cave in just to be released from the overwhelming guilt in those eyes part. But he’s also got a little something else in him. I’m thinking kangaroo, given that he can jump 3-feet straight up in the air. I’m thinking maybe I should carry him around in an apron pocket. 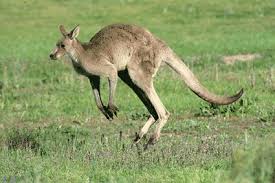 Murray was found roaming the streets in California. Perhaps he was hunting for a good Pinot Grigio.

So here I am matriarch to a family of three dachshunds and one dachshund hybrid (perhaps I should have called him Prius!) I’ll stand at the back door, rattling off a list of possible names until I hit on the one that belongs to the dog who is digging holes, eating tomatoes, taunting the koi (wouldn’t Taunting the Koi be an excellent band name?), or just obstinately sitting steps away from me ignoring me for the hell of it.

I was right in my prediction that a younger dog would pick up the energy level around here. Everyone is awake a lot more than previously. This is a good thing, for the most part, except at 3 a.m. when sleeping might be a good idea. And everyone is in better shape too. Walks are faster and more plentiful as we attempt to wear the newest family member out so that I can go out into the world and earn enough money to buy squeaky toys for him to destroy the next day.

Am I glad I have a new pup? Absolutely! Am I also crazy to have four dogs? I’m fairly certain of it. But I’d rather be crazy happy than any other kind of crazy.