Okay you can stop screaming at your c

omputer now that you’re not hateful. You are. I am. We all are. We want to think of ourselves as loving, kind, compassionate folks who do the best we can given our circumstances, but just stare into the eyes of a dog, a cow, a pig, or a human baby for five minutes and you’ll know you are much more hateful than they are.

If you’re reading this, chances are you’re not the kind of person who sends threatening texts, carries torches in the streets, or considers hate speech a pick-up line on Tinder. There are, fortunately, very few of those kinds of haters in the world. Too many, but just a fraction of the rest of us whom I will refer to as “haters light.” Sadly, whether we want to admit it or not, we empower the active haters by turning our heads, by chalking up bad behavior in others to “boys will be boys” or some other cliché, and by shrugging our shoulders and thinking, “Well, at least I’m not part of the problem.”

But we are part of the problem. Our easy forgiveness of own bad behaviors large and small allows us to feel more at ease with our own internalized hatred. Have you ever, for example, thought, “People should be required to retire at 50 so those of us who know what’s going on in the world can get jobs?” That’s hate. How about “She shouldn’t dress like that if she doesn’t want people to think she’s a slut?” Hate again. Or “I like black people. I just don’t want them in my neighborhood.” Hate. All of it.

The good news is that many of us feel the mirror has been held up and we don’t like what we are seeing. We’re slowly realizing our own role in creating a society that does not allow every American to have “life, liberty and the pursuit of happiness” as promised by our forefathers (probably at the urging of our foremothers, who never get any credit). But, how do we fix ourselves, especially when we’re so busy living our own lives?

I suggest we start by focusing on eliminating what I call “The Three B’s” (no, “bitch” is not one of them). The Three B’s are “because,” “but,” and “between us.”

Because: The word “because” refers to something being caused by something else and is a perfectly lovely word when used with science or when relaying the facts of a story, e.g. “Because the cantaloupe fell on her foot, her toes were bruised” or “She couldn’t focus for days because she took off her eclipse glasses too soon.” Science and facts – two of my favorite things!

Too often, however, we fall back on “becausing” to explain why we (or others we support) perpetuate bad behavior. See if any of these sound familiar:

I am this way because:

When I argue for putting a stop to “becausing,” I’m not suggesting that any or all of the above statements may not be true for you or me. We are all products of our past experiences. What I’m suggesting is that we all stop considering “because” to be a trump card that excuses our current behavior. If you think for just a few minutes, you’ll be able to conjure up a friend, co-worker or relative who grew up in one or more of the situations above but is less judgmental, more inclusive, and just a better all-around human being than you are. So although the past shapes us, it does not dictate who we are now.

But:  This little conjunction frequently causes trouble in our interactions with others. For example, as an improv teacher I teach the importance of the rule “Yes, and” and how important it is to stop “No, butting” people. “No, butting” isn’t something goats and drunken frat boys do; it’s what happens when we pretend to listen to someone, but immediately dismiss their thoughts and ideas and try to convince them to accept that ours are better (because that’s what our ego tells us). As an experiment, try to count the number of times you hear the words, “No, but” tumble out of your mouth every day. I bet you’ll be surprised.

“But” causes divisiveness in another way too. We use the world to claim our own goodness when someone calls us out on being racist, sexist, ageist, ableist, homophobic, or looksist (judging people on their looks). How many of the following have you used “but” to make yourself seem kinder and more inclusive in the eyes of others (and in your own)?

It’s really difficult to be called out on our own bad behavior and our first instinct is to fall back on “but.” We have to keep in mind that all of us can and should do more to make the world an easier place, a safer place, a more compassionate place for everyone (and I include in “everyone” creatures who are not human). Instead of giving yourself a pass for the good that you do, just do more and for people and other earthlings who are not like you – no “buts” about it. It’s easier, and more rewarding, than making excuses.

Between us: If you would be humiliated by the inner judgmental thoughts you reveal to your friends and family, chances are those thoughts are hateful and divisive. Any time you tell someone “this is just between us,” (unless it’s an issue of national security, you’re pregnant or you’re planning a surprise birthday party for someone), what you may mean is, “This is too mean-spirited for me to share out loud.”

I am not suggesting we can or should scrub all our thoughts until they’re squeaky clean. But we should become aware of how often we share inner musings that reveal deeply held prejudices we don’t want to admit we have. Do any of these ring a bell?

The best way to deal with prejudiced thoughts you share with close friends is to ask those friends to regularly call you out (and ask them if they’d like you to do the same). You can even provide them this set of questions to ask you when they feel something is inconsistent with the person you want to be: Why do you think you feel this way? Does this belief harm other people? Has it proven true to you or do you hold it spite of reality? If it has proven true, is it possible that what’s happened in your experience does not reflect everyone else’s?  Would you like to change this belief? How can you start to do that?

Self-change, like world change, is difficult and the best way to approach it is one simple step at a time. For now, just focus on reducing or eliminating The Three B’s.

The Importance of being Silly

I believe in silliness. Silliness makes the hard times easier to survive and is a pink and glittery punctuation mark to end average days and boring night. Silliness forces us to ask ourselves why we take everything so seriously and live with the consequences of the stress that results.

Some people struggle with being silly. It’s childish, they think, or it’s immature and should be left to those who don’t have real jobs or important things to do in life. What if, though, being silly and childlike is one of the important things to do? What if more of us were silly more often we created a world with less violence and fear and suffering? A world in which the positive energy created by kids and growns-up all forgetting their own egos and playing well together was contagious and changed everything for the better?

The best part is that silliness isn’t expensive or really all that scary once you take the plunge. All you really need is a few toys and a costume trunk (every adult needs a costume trunk!) And the courage not to care what anyone says or thinks. Remember, all the great minds were ridiculed and dismissed and if yours is covered by a pink wig or wearing a bra on the outside of her outfit, you will be too. The joy comes from knowing that even those people who become haters will be affected by your ebullience. Maybe not right away, but your silly self with worm its way deep into their souls some time down the road.

Silliness — changing lives for the better one playful act at a time. 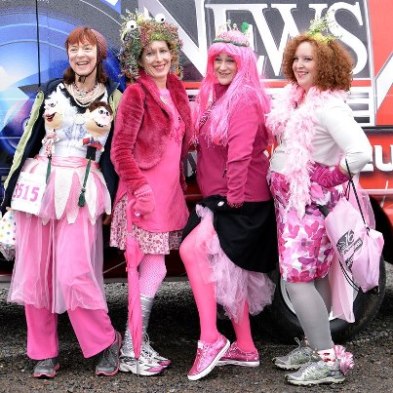